Iranian raisins(Kismis) are one of the best raisins in the world. Also, Iran ranks third in raisin exports.

Raisins are nutritious dried fruits like dried apricots, figs are available all season. Raisins are an excellent source of vitamins and minerals. Persian Raisins have health benefits for babies.

SunExport, Best dry fruit company, exports and sell best types of Iranian raisins(Golden-Black-Green-Kashmari and Sultana) to all over the world.

Everything you need about Raisins, Iranian Raisins, and Raisins benefits is here. 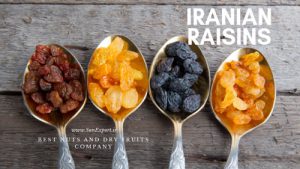 Raisins are a good source of vitamins and nutrients in the body such as iron, potassium, calcium and B vitamins. Other amazing properties of raisins are anti-cancer. Raisins are useful in treating heart disease and lowering blood pressure and are also useful for diabetic patients.
Also, Raisins enhance nerves and eye health. Raisins are low in sugar, useful for tooth and gum health.
Raisins, due to fiber, prevent colon cancer and are also effective in controlling blood sugar.
Eating a few raisins a day helps boost memory and therefore keep people safe from Alzheimer’s disease.

Green raisins are one of the best and most desirable types of raisins. This raisin has a beautiful green color and an extraordinary taste that is best known among all raisins. These are some of the unique features of this product.

Two methods are used to produce green raisins.
The first method is the use of cold emulsions, which is a mixture of certain percentages of potassium carbonate and raisin oil.
The grapes are cleaned after harvesting and immersed in an emulsion solution. Then the drying process is continued for 1 to 2 seconds, depending on the type of grapes consumed for raisins.
In the second method, the sulfur powder is poured into a small tray and burned. The raisins are then exposed to smoke.

Raisins are suitable for all ages. Even for pregnant and middle-aged children and women.
Raisins have antioxidant properties that are useful for early aging. Green raisins prevent osteoporosis and are very useful in menopausal women. It is also useful in preventing constipation.

Golden or yellow raisins are one of the best-exported raisins in Iran. Also, Golden raisins have two types, grainy and grainless.

Black raisins are rich in nutrients and a variety of vitamins. Consuming this dried fruit will greatly enhance memory and increase learning power.

Treat gastrointestinal disorders and strengthen the stomach are the properties of black raisins. In general, black raisins help the body’s overall health.

As the properties of green raisin, this dried fruit is also useful in preventing and treating anemia because of its folic acid and iron content. 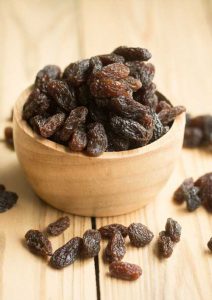 Black or red compounds, including anthocyanins and polyphenols in black grapes and (black raisins), have anti-cancer properties. Also, they are effective in preventing various diseases and cancers.

Black raisins contain a lot of calcium and boron. So organic black raisin is a good nutrient for strengthening bones.

Keeping the heart healthy is one of the properties of black raisins. The compounds in this fruit are effective in preventing heart attacks.

Black raisins are one of the nuts that boost sexual energy.

Black raisins are high in calories and, like any other dried fruit, are rich in fructose and glucose. which are effective in weight gain. Black raisins are very useful for the diet of bodybuilders or athletes who need a lot of energy and are also recommended for children who are overweight.

Cashmere raisins are one of the best Iranian raisins because of their good sweetness, high quality, free from soil contamination.

This type of raisins comes from small grapes. Sultana raisin is used for rice. Iran also exports organic sultana raisin to other countries. The color of this raisin is light and very tasty

Good quality raisins are exported without any abnormal taste as well as free from pests and sand. High-quality export raisins have a moisture content of less than 0.5 wt% and sulfur anhydride and sulfur smoke of less than 2,000 wt. The quality of raisins also depends on the quality of the grapes.
Another important factor in the quality of exported raisins is the lower number of crushed raisins than the number of healthy raisins in the specified quantity. This factor is directly related to the process of raisin removal. 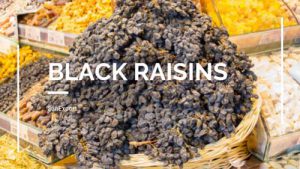 As a result, Raisins are good sources of carbohydrates and iron which are very useful for the baby.

Grape or raisin consumption is lethal to dogs. Even a small amount of it can cause kidney disease. The best way to prevent poisoning is to remove grapes and raisins for the dog.

Iran is one of the countries active in exporting and selling raisins. Iran’s share of exports of raisins is about 2% of the world’s exports. More than $ 5 million is generated annually from this source of revenue.
Iran’s top-quality raisins are exported to countries such as Australia, the United Kingdom, the United States, Italy, and France. More than 6,000 tons of raisins are exported in Iran with excellent quality. The raisins produced in Iran include golden, green and black raisins.

Prices of raisins vary depending on the exchange rate, the production process, the rate of grapes purchased and how they are packaged. So, the price of exported raisins on the world markets is around $ 3 / kg. That’s up 2.5 percent from a year ago.
Customers contact us for the exact price of exported Iranian raisins as well as useful information about raisins.