Indigestion is a common problem that affects many people, especially if your food choices are unhealthy. Indigestion can be one of the symptoms of a stomach ulcer but, if someone feels a burning sensation with pain in the stomach and nausea, and these symptoms do not go away, they may have gastritis. Gastritis is a digestive problem caused by inflammation of the lining of the stomach. The cause of the burning sensation in the central part of the stomach or chest is the loss of the layer and stomach acid.  If you don’t treat gastritis, it can lead to stomach ulcers, persistent pain, and inflammation, and bleeding can lead to death, and also Chronic gastritis can also lead to stomach cancer. 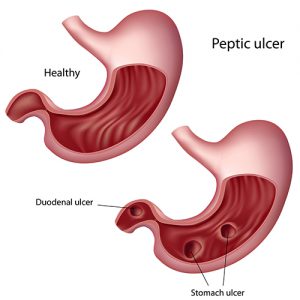 What is the common cause of gastritis?

One of the most usual causes of gastritis is a bacterium called Helicobacter pylori that causes a stomach infection. Symptoms of gastritis include burning sensation, cramps and stomach pain, nausea, and persistent sore throat. If you experience those symptoms, you should take them seriously. Changing Lifestyle can be a significant step towards repairing the lining of the stomach, preventing inflammation, and fighting infection.

The peptic ulcer is an acute complication of gastritis and can bleed in the lining of the stomach, intestines, or esophagus, which can be life-threatening. Bleeding in these areas may cause the following symptoms: 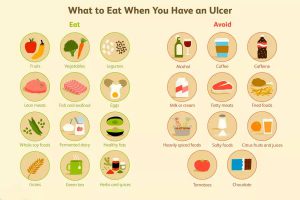 Although there is no specific diet to treat gastritis, research has shown that eating certain foods can kill Helicobacter pylori. On the other hand, eating certain foods can make things worse. Research has shown that salty and fatty foods change the lining of the stomach. Salty foods can alter cells in the tummy and cause infections. Also, diets high in fatty and salty foods increase gastritis. Before doctors realized the importance of Helicobacter pylori in gastritis, they advised patients to drink milk to prevent the harmful effects of acidic foods, but, after discovering that, they do not recommend drinking milk.

As we have said, eating certain foods can kill bad bacteria and heal the ulcer stomach. Three of these specific foods are Yogurt, Broccoli, and Spinach. But How they can help!

Broccoli contains a chemical substance called sulforaphane and has antibacterial properties. Also, it contains anti-cancer compounds that are effective in treating inflammation and reducing the risk of stomach cancer.

Yogurt contains beneficial compounds and bacteria and can increase the body’s ability to fight unwanted bacteria in the stomach. Other foods that can prevent the growth of Helicobacter pylori and reduce the risk of gastritis and ulcers include:

Foods to Limit when you have acid reflux and an ulcer

While some foods are effective in treating stomach ulcers, others make it worse. Fatty, acidic, and spicy foods are the most harmful to the stomach. Some patients with ulcer stomach also have acid reflux. Reflux symptoms appear due to an unusual increase or decrease in stomach acid volume, and you can control it by changing eating habits.

The best diet for stomach ulcers

Although research does not mention a specific diet, following a healthy diet plays an essential role in healing stomach ulcers. Points that can use to make the diet as useful as possible to fight against gastritis and ulcers.