As maintained by BBC World Service Poll conducted at the end of 2005, 71% of Iranians evaluated India’s impact positively, the most positive score of India for any country in the world. Also, because Iran being on upright terms with both India and Pakistan, Iran has offered to act as a negotiator among the two. India and Iran have welcoming relations in numerous areas. There are major trade ties, mainly in crude oil imports into India and diesel exports to Iran.

On 1/3/2019, a meeting was held by Iran-India joint commission in Iran chamber of commerce. Mr. Fadavi our Export manager and Mr. Ghaffari our Marketing manager attended as Sunseas business Group representatives in this meeting. Also, head of Iran chamber of commerce and 10-member Indian delegation and some representatives from other parts of privates sectors were present in this meeting. Several Indian commodity traders and investors, including delegates from Agricultural, Industrial, Banking, Oil and petroleum, and IT section were part of the delegation.

Iranian dates and also Dates products were introduced to the Indian private sector, and a Preliminary contract was signed by side. According to contract, Sunseas Business Group became responsible for supplying Fresh fruits and vegetables including; Iranian apple, Kiwi, Pomegranate, Grape, Lettuce and fresh dates such as Mazafati, Piarom, Sayer, and Shahani. Also, we signed another contract with one of India major confectionary ingredient trader, exporting high-quality date syrup and paste from Iran to our Indian friend.

India and Iran traditionally share centuries-old sturdy socio-cultural and trade relations since the earliest times. While Iran is one of the leading manufacturers and exporters of oil, India, a huge market for hydrocarbons, is deeply reliant on imports to meet its domestic needs. We believe, taking advantage of both Iran and India trading potentials, we can build uncountable friendships and trust based corporations, benefiting both sides. 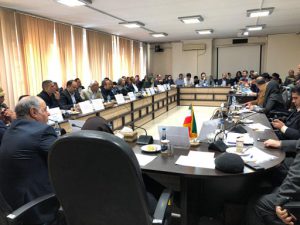